Looking for an entrance, Tom stumbled along the campus walkway and tried each door.

Huddled in an entryway, he realized they were surrounded.

“It’s okay, Tom,” she whispered with a heavy heart, tears gathering in her eyes. “We did our best.”

Just then a door swung out behind them, knocking Tom in the back.

“Pardon me, terribly sorry,” apologized Professor Hainsworth. He was dressed in a crisp white shirt, burgundy vest and tweed jacket. His short, grey hair was neatly trimmed. “I was headed out for a bit of fresh air.”

Dr. Randolph Churchill Hainsworth III was a celebrity in the academic community, with doctorate degrees in physics, advanced sciences, mathematics, and British literature (the fourth degree was just for fun). Promised a sabbatical three years ago, along with countless other vacations, he still hadn’t received any time off. Stressed and overworked, with no help or assistant, he was plagued with endless days of teaching and grading. He longed for a break, for adventure, for freedom, for anywhere in the world but Oxford.

Although Hainsworth was busy with his own problems, he was touched by the sincerity in their voices. Tom’s integrity and Sarah’s innocence softened his rigid exterior and stern temperament. He felt compelled to help.

“All right,” he replied apprehensively. “Get her upstairs quickly and wait for me in my study.”

Almost an hour had passed. Sarah’s foot was wrapped with ice and elevated on a pillow. She had taken an aspirin for the pain and was now sleeping soundly. Hainsworth deduced that it was nothing more than a twisted ankle and should be fine. Tom walked around the room telling Professor Hainsworth everything; his life growing up in the different orphanages; his time at Weatherly and the terrible conditions; the Factory and its grueling work; Mr. and Mrs. Grievous, their vicious dog Wind, Speckle; rescuing Sarah; all the orphans helping them escape; running through the countryside; Detective Gowerstone, finding the balloon; the continuing chase; and anything else he could think of. Tom had never talked so much in all his life. His throat was parched, and his mouth was exhausted.

“That’s incredible, Tom,” said the professor sympathetically, trying to process all the information. “The things you’ve both endured at Weatherly — horrible, just horrible.” He shook his head in disgust. “Despicable people, those Grievouses. I can’t believe things like that still go on, right here in England of all places. It’s just dreadful,” he declared.

“And now you’d like to get to London. Start a new life.”

Hainsworth poured a glass of water and handed it to Tom.

“I suppose if I ever ran away, London is where I would venture. Spectacular city — so much to do, so many places to go.” The professor paused in thought, reminiscing. “The author Samuel Johnson once wrote, ‘When a man is tired of London, he is tired of life.’”

Hainsworth looked over again at the stacks of papers dominating his office.

“I’ll tell you what,” he said, inspired by a sudden spark of insight. “I’ll make a deal with you.”

“If what?” they both exclaimed.

Hainsworth leaped up. “If you let me safely escort both of you to London,” he said excitedly. “It sounds like you could use some help.”

Tom and Sarah were surprised. Yet considering their current situation, it was an offer they couldn’t refuse.

Tom helped Sarah downstairs, followed by Hainsworth. No one knew what to expect when the door opened or what the future would bring, but there was an underlying sense of excitement. Although Tom and Sarah had journeyed this far on their own, they now had a trustworthy ally. 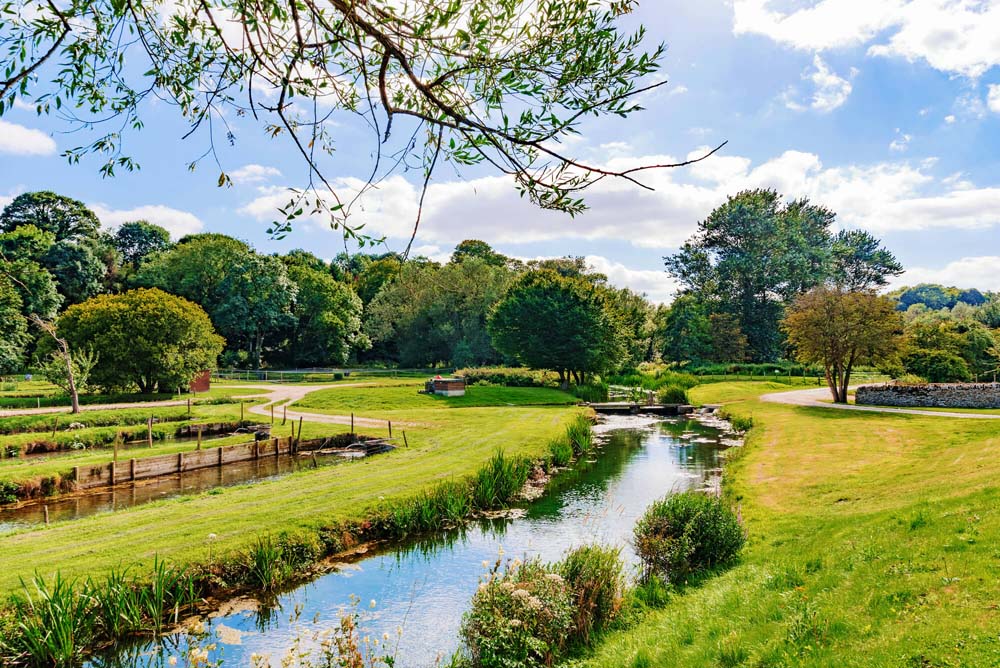 was so ecstatic he could hardly contain himself. He moved back and forth, looking over one side then another. He couldn’t believe it, that he had left Oxford and was floating through the sky in a balloon. His long-needed vacation had finally arrived because he seized the moment and took it. His spirits soared as he embraced the breathtaking views. 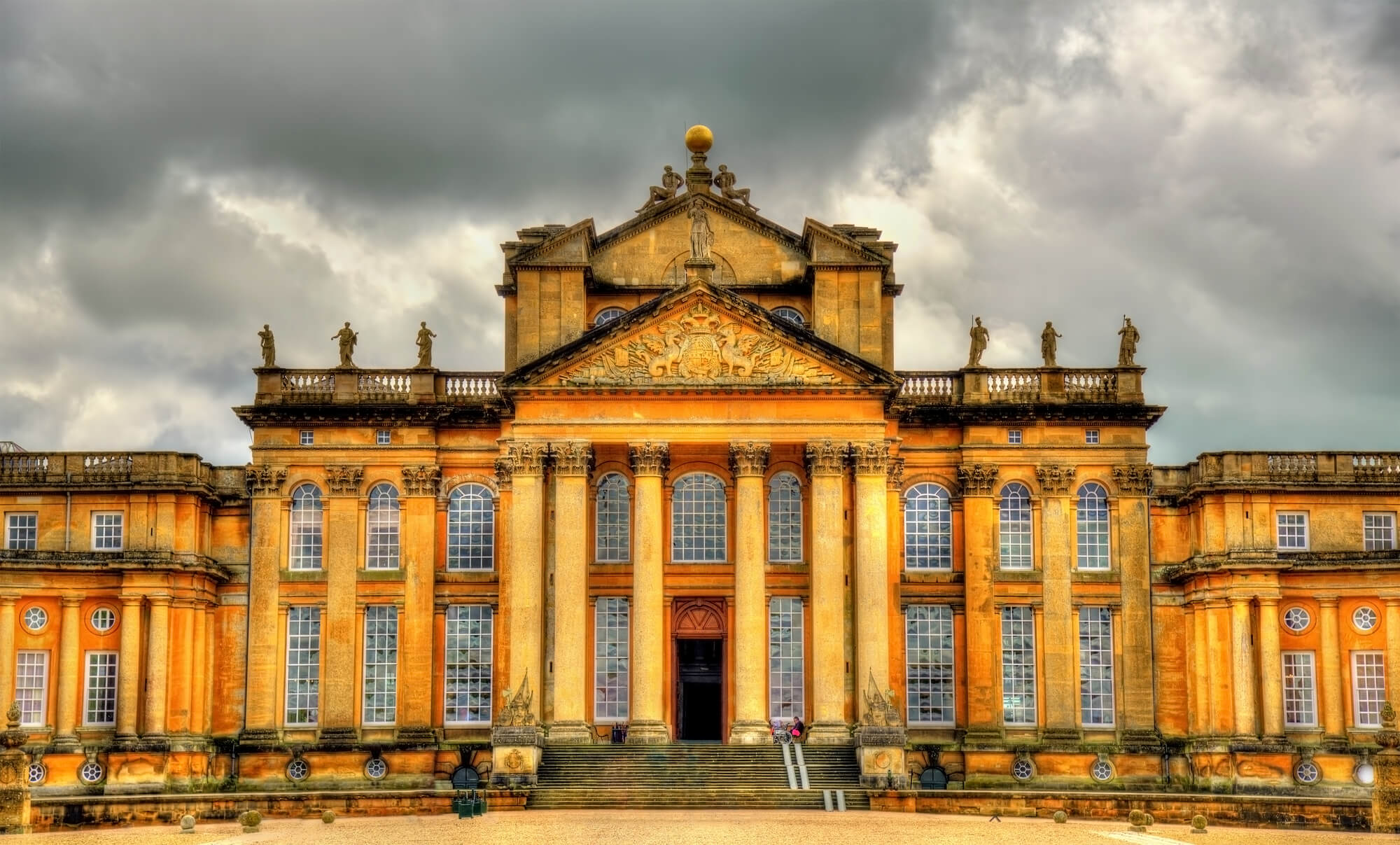 Tom and Sarah got back into their routine. They diligently worked the ropes and funnel, maneuvering in and out of clouds and heading toward their presumed destination.

“Professor?” inquired Sarah, noticing an enormous property below. “What’s that over there?”

“Is there any other?”

“I suppose not, Professor,” he replied quietly, aware that he was with a devout Churchill enthusiast.

Constructed from a soft, golden stone, this massive five-story Baroque structure dominated the countryside. There was a beautiful lake in front and thousands of acres of tree-covered hills and parkland. The roof was covered with an assortment of intricate towers and spiraling chimneys.

were getting into the conversation, a strange silence filled the air. The temperature quickly dropped, and the atmosphere darkened, rapidly turning the sky pitch black.

Suddenly an explosion of rain showered down, the heavens unleashing their wrath.

Everyone nervously glanced around, completely caught off guard. 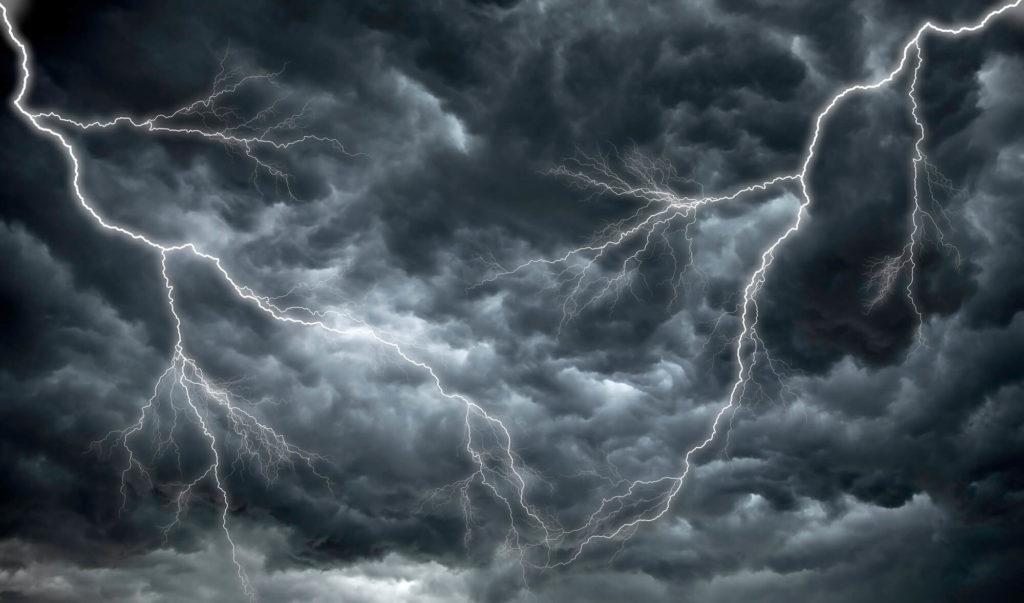 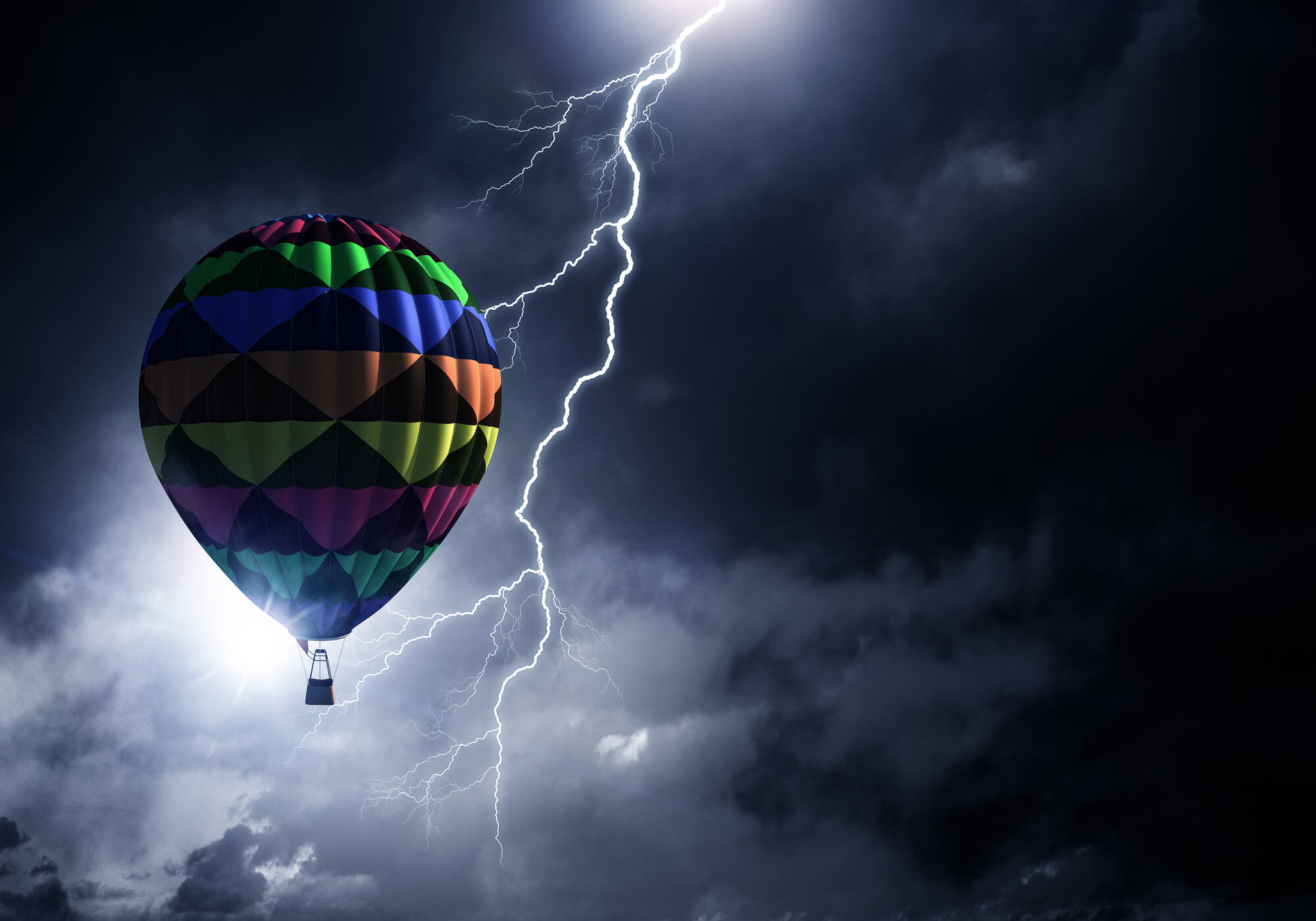 grumbled Hainsworth, his mood turning from cheerful to disgruntled.

“You live in England and don’t like rain?” asked Sarah, surprised.

“One of the unfortunate dispositions of this glorious country,” he admitted sadly, then pulled his coat more tightly around himself.

“What should we do?”

“Let’s try to maneuver out of this mess and take the balloon toward the ground.”

However, before anyone had a chance to act, a gust of wind swept them upward and into the eye of the storm. They each grabbed the basket as a turbulent gale battered the balloon, knocking it around like a tiny raft in a raging sea. Out of habit, Hainsworth popped open his umbrella, but the wind whipped it from his hand and sucked it into the belly of the tempest.

“We’ve got to get out of this,” yelled Tom, hopelessly tugging on the ropes.

“Hold on tight,” shouted Hainsworth, a concerned look creeping over his face.

Lightning bolts sliced through the sky, followed by sharp cracks of thunder. Vibrations shook the air as the balloon was tossed among the clouds. Hail rained down in devastating bursts, landing and ricocheting everywhere. One smacked Sarah on the hand, another hit Tom in the back.

“The balloon’s going to be ripped apart!” screamed Sarah. 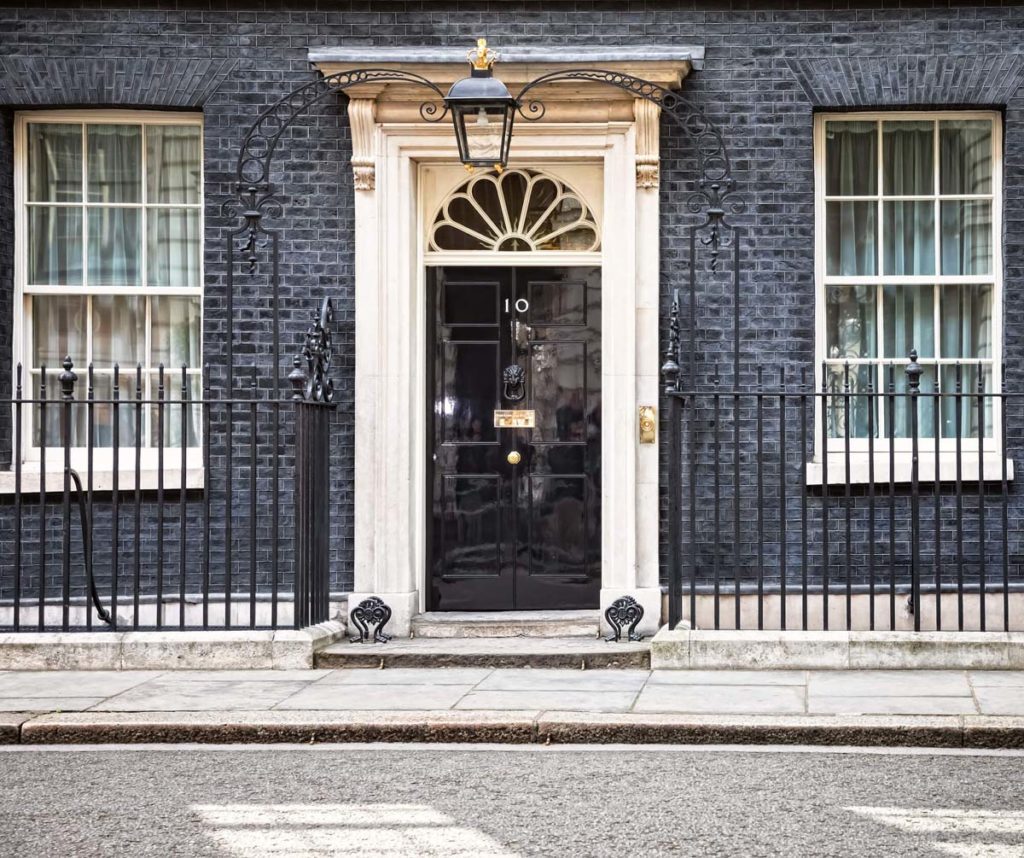 drove up to 10 Downing Street, Westminster, London. He parked his Range Rover in front of the famous brick facade and legendary black door.

This address had been the official office and residence of the British Prime Minister since 1732. Originally three separate Georgian houses, it was consolidated into one home with a Cabinet Room, State Dining Room and a private apartment among the other hundred rooms.