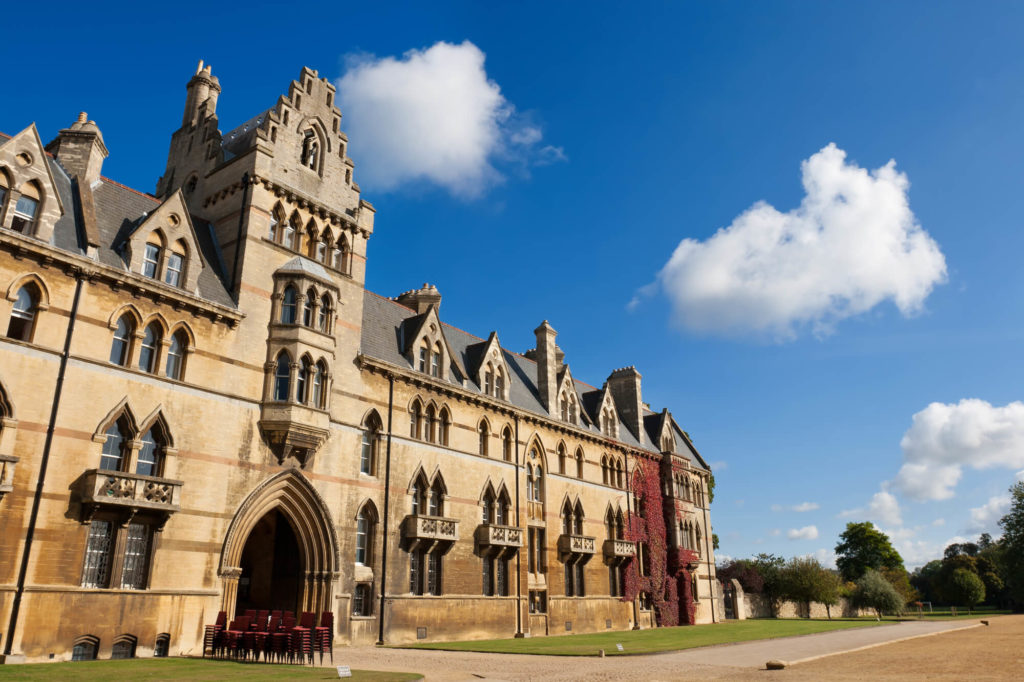 Renaissance and Georgian structures, the fable-like campus was buzzing with students rushing to various activities. Known for graduating thirteen prime ministers, it was the most prestigious of all the schools. 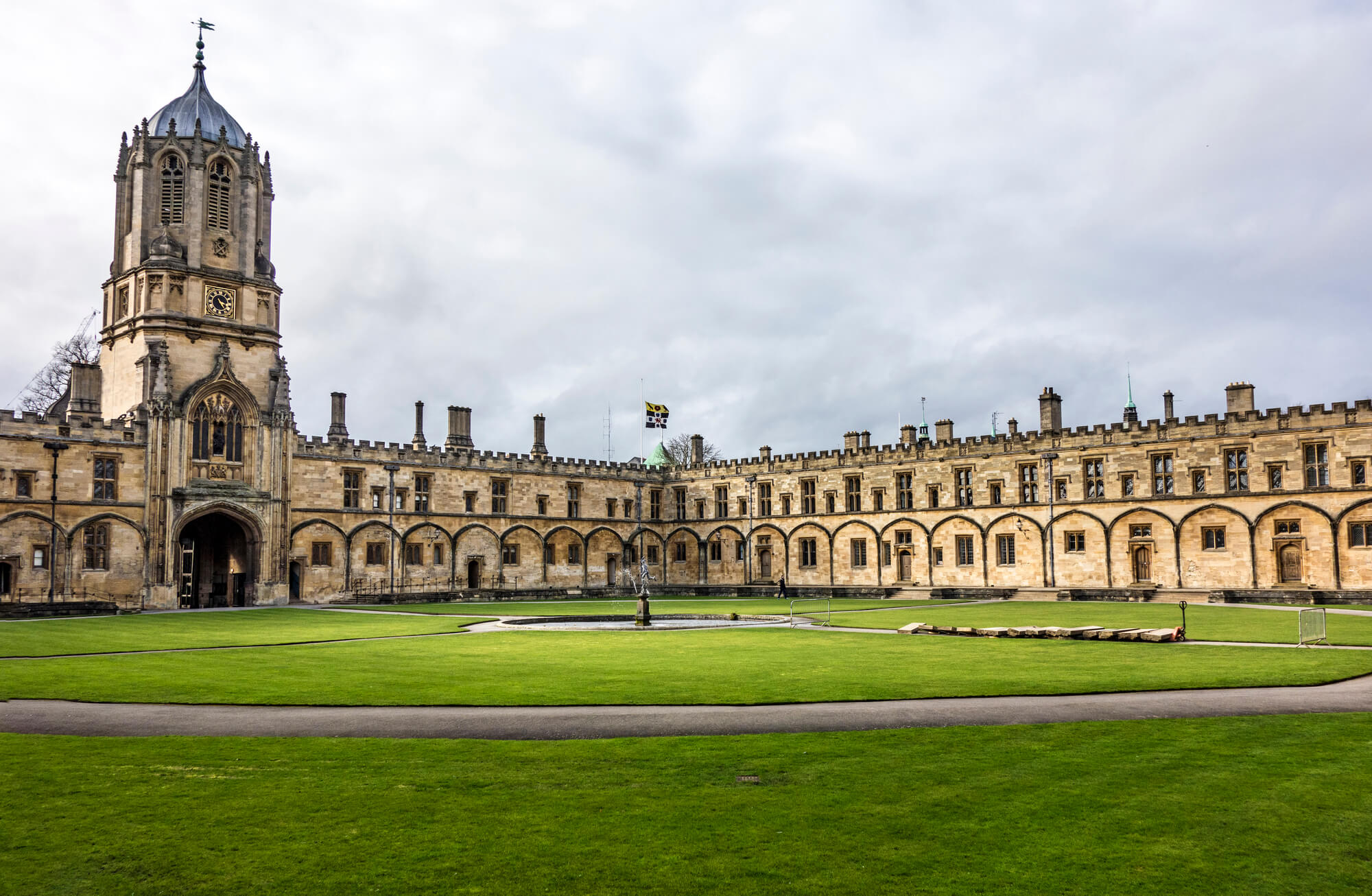 was originally founded in 1525 by Cardinal Wolsey as Cardinal’s College, taking over the site of St. Frideswide’s Monastery (9th Century AD). In 1529 the College became the property of King Henry VIII, who re-founded the College in 1546. The new joint institution of cathedral and University College was named Aedes Christi (Christ Church in English). Major additions were made over the years, and Wolsey’s Great Quadrangle was crowned with the famous gate-tower designed by Sir Christopher Wren. To this day the bell in the tower, Great Tom, is rung 101 times at 9 pm at the former Oxford time every night (9:05 pm GMT/BST). King Charles I made the Deanery his palace and held his Parliament in the Great Hall during the English Civil War (1642–1651). Christ Church has produced thirteen British prime ministers, more than any other Oxbridge college. The college was also the setting for parts of Lewis Carroll’s Alice’s Adventures in Wonderland. Notable alumni include the philosopher John Locke (1632–1704), leader of the Methodist John Wesley (1703–1791), art critic John Ruskin (1819–1900) and novelist Lewis Carol (1832–1898). 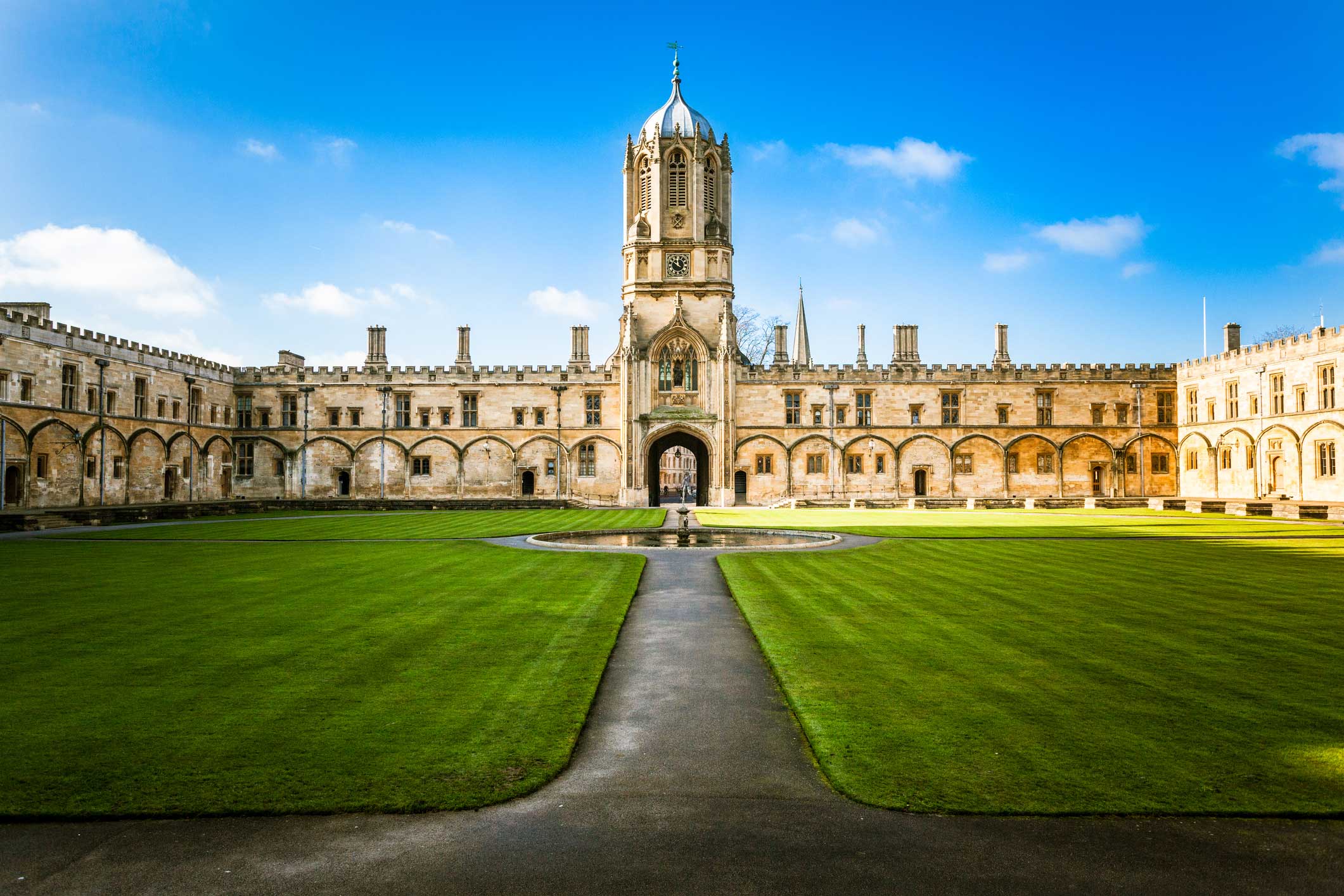 Mingling among the scholars,

Tom and Sarah noticed a tall gangly student, Oliver, who seemed to know everyone. They watched this charismatic young man with interest.

Oliver turned and noticed Tom and Sarah hiding among the crowd. “Poor guy had the misfortune of ending up at Cambridge for two years. Comes from too much money; doesn’t know how to act properly.”

“Our rival school,” whispered Oliver, dropping his voice. “We don’t usually mention the C-word in public.”

“You look lost. Maybe I can help,” he offered.

“Sir . . . I like that. Don’t think I’ve ever been called sir before,” he laughed. “The name’s Oliver, Oliver Horningbrook, second year.”

“Second year?” Sarah inquired, trying to be part of the conversation.

“In college. I’m a sophomore.”

“Right,” interjected Tom awkwardly and extended his hand in a cordial gesture. “I’m Tom, and this is Sarah.”

“Hello,” smiled Sarah, her stomach rumbling at the wonderful aromas drifting from the open door.

As Oliver shook their hands, he wondered what was behind their worried faces.

“Nice to meet you,” he acknowledged, continuing to observe them. “Well, you couldn’t be students, unless you’re some kind of geniuses. We have a few of those here.”

“Tom’s pretty smart,” chuckled Sarah, “but I wouldn’t call him a genius.”

“Thanks,” snapped Tom, giving her a disapproving look. She frowned back, taunting him.

“You guys look hungry. Why don’t you join me in the dining hall?” offered Oliver, motioning toward the door.

“But thank you,” added Sarah quickly.

Oliver grinned. “Don’t worry about it. You’ll be my guests.”

“Sure,” said Sarah, nudging Tom’s side.

“Good, follow me,” said Oliver as he guided them through an enormous doorway. 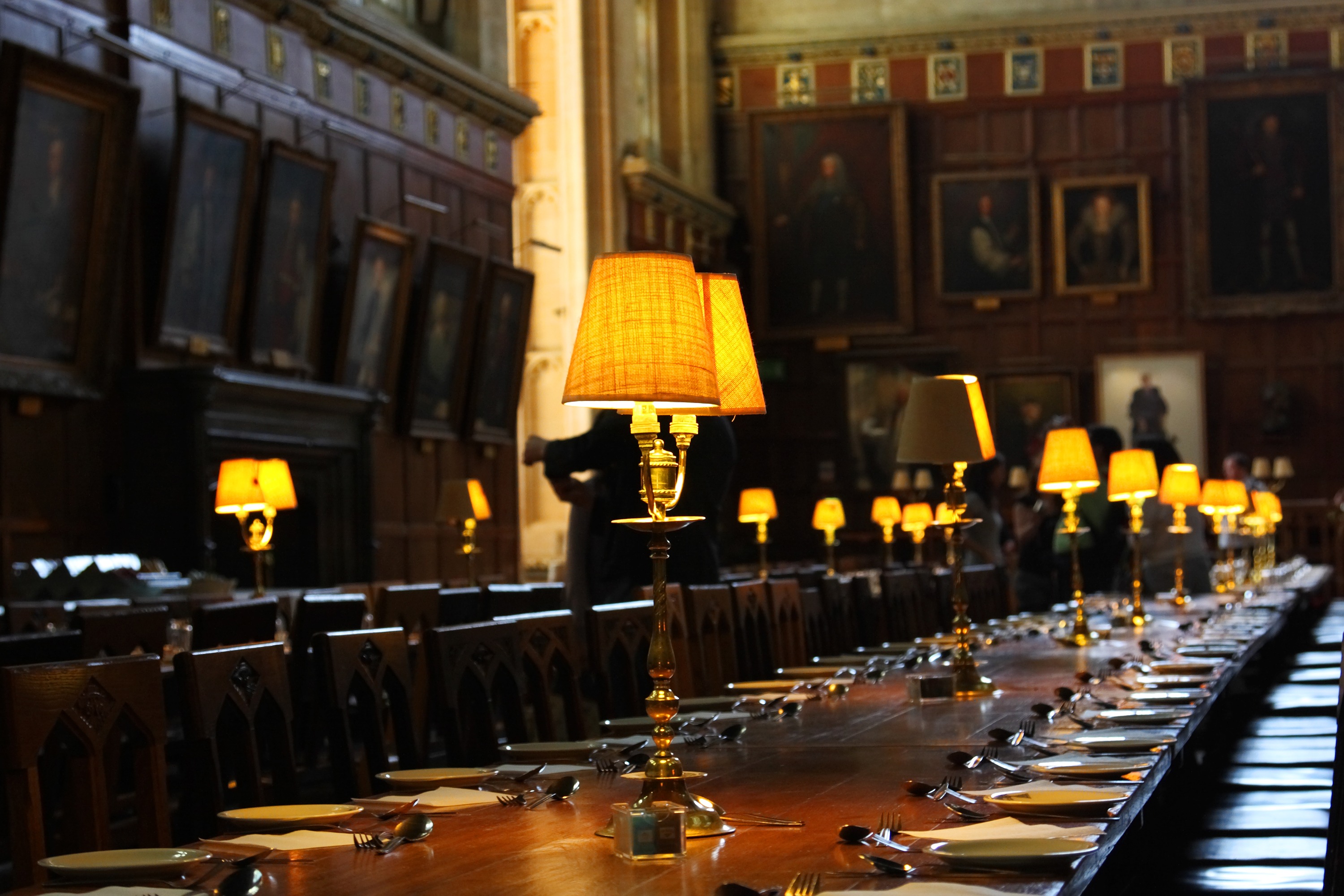 dining hall was a beehive of activity: the loud chattering of conversations, the clanging of glasses and the rattling of utensils. Long oak tables were packed with students. The thirty-foot high vaulted ceiling was a marvel of medieval engineering, and stained-glass windows studded the walls. Famous paintings of past presidents and distinguished alumni hung about, their disapproving faces glancing down at the overconfident students. Professors and other faculty, dressed in burgundy robes, sat at a head table.
As Oliver escorted them toward the main serving area, Tom and Sarah’s eyes ignited. There were all kinds of food: turkey and roast beef, mashed potatoes with gravy, bowls of salad, fruits, vegetables, breads and pastries — it was a vision of delights.

“I have to get a few things from the library. Interested in coming?”

“Sure,” answered Sarah and Tom together, thrilled at the prospect of exploring something new.

“You guys see that big tower over there?” asked Oliver, pointing to a clock as it struck 9:00 p.m.

“It has a huge bell hanging in the middle. Guess what it’s called?”

“It’s called Great Tom,” announced Oliver proudly. “What do you think about that?”

Tom and Sarah looked at him skeptically.

“I’m serious, ask anyone,” he insisted. “Not sure why it’s called that, I just know its name.”

“I think it’s a brilliant name for a bell,” said Tom smugly.

“I’m sure you do,” scoffed Sarah, smacking his arm. 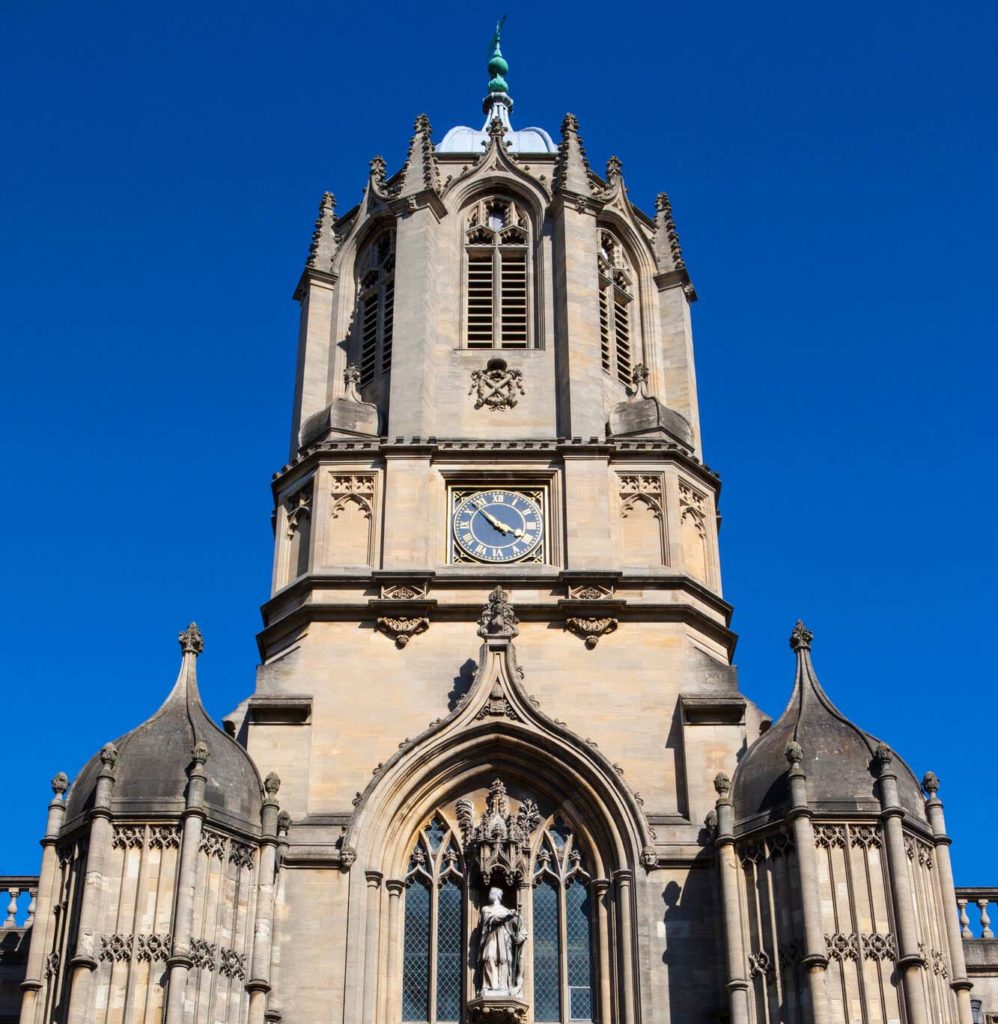 “Perhaps you were meant to find this campus tonight and bump into me,” continued Oliver philosophically, glancing toward the sky. “One never knows how these things work out sometimes. Maybe someone is looking out for you.” He smiled as they walked up the library’s enormous granite steps.

After getting through the receptionist and turnstile, all three entered the library. Every book imaginable lined the mahogany shelves.

It was paradise: no more sneaking one book at a time, now they had access to all the knowledge in the world.

The two marveled at all the different sizes and titles of the leather-bound books. Walking down the endless rows, they studied ancient documents and skimmed various British classics: Jane Austen, Robert Browning, Lewis Carroll, Charles Dickens, Elizabeth Gaskell, Rudyard Kipling, Alfred Lord Tennyson, William Makepeace Thackeray . . . the authors went on and on. They flipped through some geography books half their size, ran down aisles searching for topics, and climbed up a wooden ladder to a second level that overlooked the marble floor below. Warned twice to be quiet and once for running, they were simply having fun.

By the time Oliver wandered back, Tom had chosen a Dickens novel and Sarah a large art book filled with pictures.

Just as they were checking out, Sarah gasped. Out of the corner of her eye, she spotted one of the plainclothes officers browsing the aisles.

Tom’s eyes opened wide. He anxiously fumbled with his book, dropping it to the ground and making a deafening thud.

Everyone in the library instantly looked over, including the officer.

“Leave the books,” said Oliver impulsively. “Let’s get out of here!”

They hurried to the entrance and out the door. The officer rushed after them but got stuck in the turnstile. He groaned as he smacked the metal object.

Anywhere is better than out here,” said Tom, watchfully peering behind him.

They sneaked in the back entrance of the dormitory, a magnificent Romanesque structure on the edge of campus, and climbed up five sets of winding stairs to a large suite. 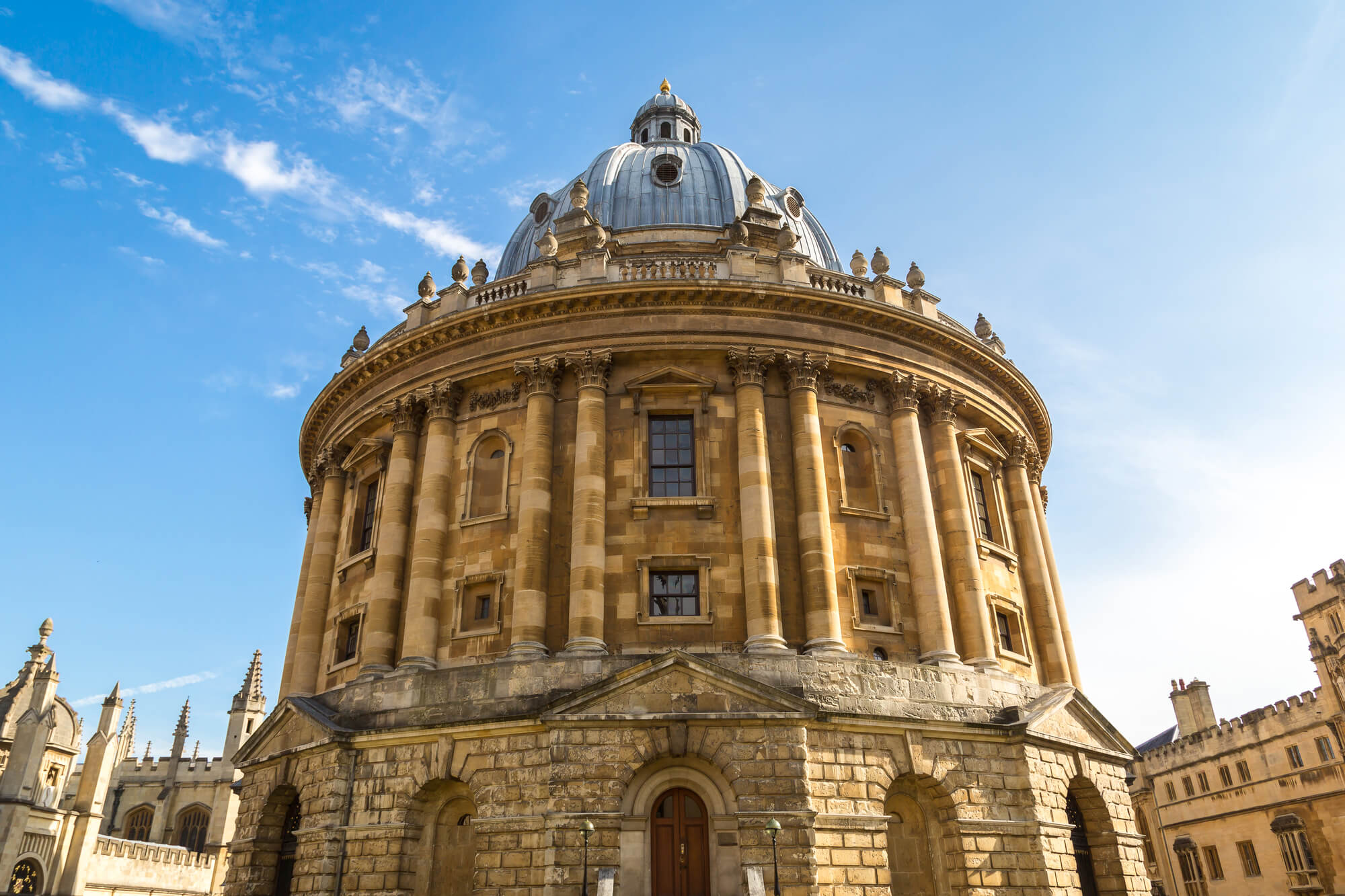 morning was glorious, the sun beaming through the windows. Outside, students were rushing to breakfast or an early class.

Tom and Sarah woke up around 7:30. Both had slept through the entire night, hopelessly in need of rest. They stumbled off the couch and stretched their arms.

They ran across High Street and stopped by Radcliffe Camera, trying to remember where Oliver’s dormitory was. Tom observed the building, studying the interesting architecture: towering Corinthian columns, classical pediment windows and a massive leaded dome. 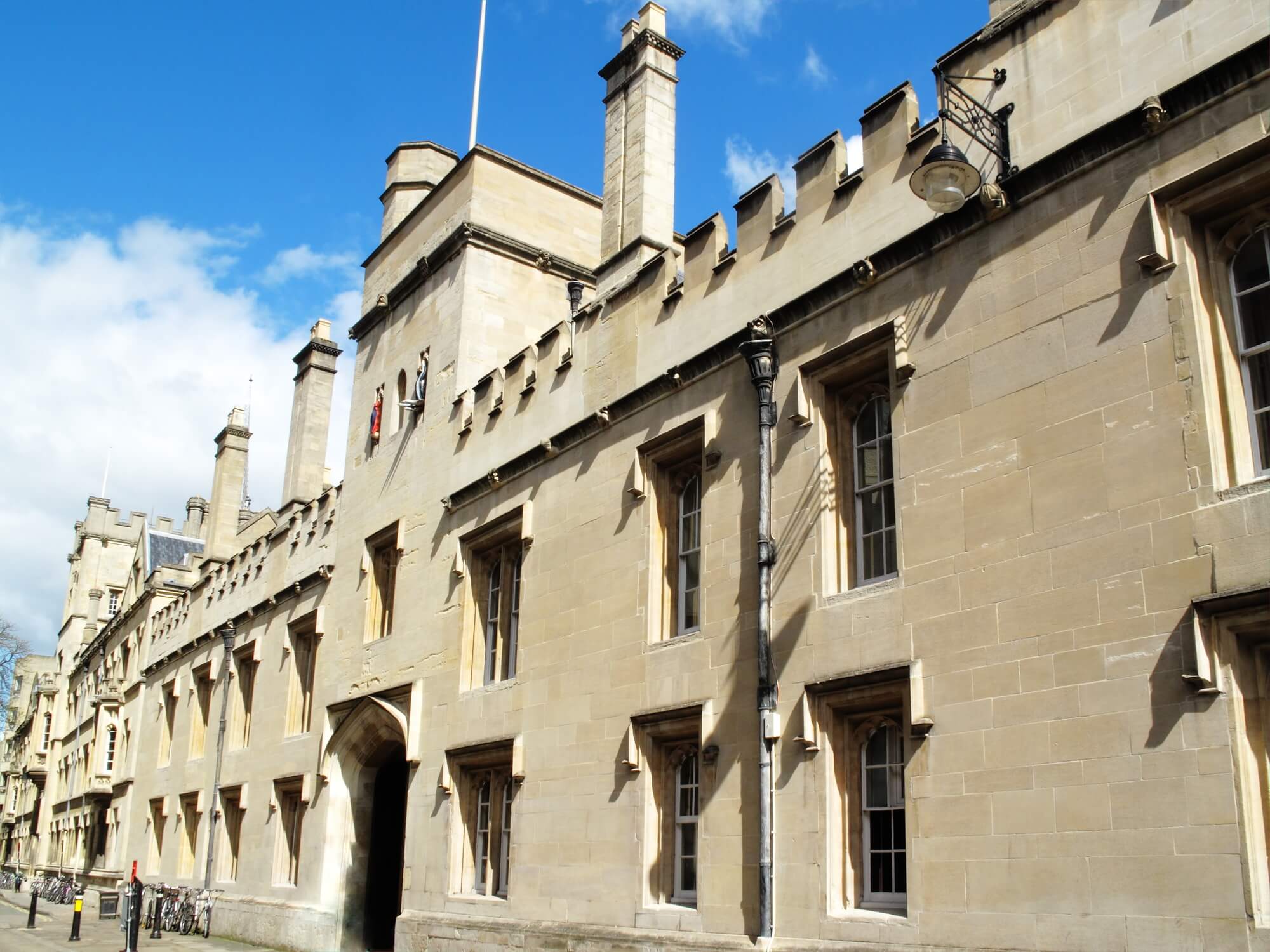 the windows, he suddenly noticed Detective Gowerstone talking on the phone.

The detective slammed down the receiver and ran for the door.

Gowerstone rushed out of the Radcliffe Camera and watched Tom and Sarah disappear down a street. He quickly called for backup and pursued on foot.

Tom and Sarah frantically worked their way through the crowd.

“Where to?” asked Sarah.

As they hurried over the uneven cobblestone, Sarah tripped and twisted her ankle. She smacked the ground, screaming in pain.

Tom rushed back and knelt.

“Are you okay?” he asked anxiously.

With his arm, gently around her waist, he carefully lifted her.

She slowly shifted her weight. “I can’t. It’s too painful.”

“Put your arm around my neck. I’ll support you.”

She hung on securely as they staggered down the road, stopping on Broad Street.

“Let’s get to that building over there,” Tom suggested. “Maybe we can hide inside.”

Sarah cringed, the throbbing pain shooting through her body. “I can’t go any farther.”

Tom lifted her in his arms and awkwardly hobbled across the street to Trinity College.