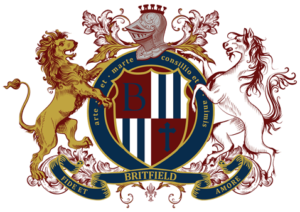 Britfield & the Lost Crown Movie & Cable Series Rancho Santa Fe, CA 1/25/2022. Global best-selling and award-winning adventure novel Britfield & the Lost Crown will become a feature-length, live action movie (the first of seven films). Estimated at a film budget of $100-$120 million, pre-production is tentatively planned for summer/fall of 2022, followed by principal production in England/Eastern Europe in spring 2023. Global release could be as soon as November/December 2023 or 2024. Based on industry research, Britfield & the Lost Crown is projected to become one of the most popular films in cinematic history, rivaling the original Star Wars (1977) and ET (1982) at the boxoffice.

Several award-winning screen-writers and directors with a successful history of action-adventure family movies are being considered, along with A-list actors for the main roles of Detective Gowerstone and Professor Hainsworth. Other top British actors are being considered for Mr. and Mrs. Grievous, Speckle, Oliver Horningbrook, and Dr. Beagleswick. The lead roles of twelve-year-old Sarah Wallace and Tom will be played by two up-and-coming British actors, not yet announced. Two actors being considered for Detective Gowerstone are Colin Firth and Benedict Cumberbatch. A perfect fit for Professor Hainsworth would be either Bill Nighy and Michael Gambon. Ideally, Mr. and Mrs. Grievous would be played by Helena Bonham Carter and Alun Armstrong.

With the first of seven Britfield movies in development, the creation of several television series is being discussed. Following the success of historical dramas like Downton Abbey and The Crown, and adventure shows such as Reign and The Tudors, Devonfield will develop a fast-paced action series around the Britfields, highlighting the different centuries until Britfield & the Lost Crown begins (21st century). Staring during the Norman conquest of England (1066), through the Tudor consolidation of power (1500s), the Stuarts’ pursuit of absolute monarchy (1600s), and Queen Victoria’s reign (64 years), the series will show how the Britfields continually battled for their rightful claim to the British throne through betrayal, deception, and wars.

Another series will focus on Weatherly Orphanage (Northern England), an enormous sixteenth-century Elizabethan castle enclosed by a twelve-foot wall. Entering the world of Weatherly, viewers will learn how the orphans survive the austere conditions, endure the “The Factory” where handcrafted items are created, outsmart the scheming caretakers, educate themselves through the “Book Exchange,” and retain hope for a better life and future. Coming together during these extreme circumstances, they establish a tight-knit family, forged not by blood or birth, but through a stronger bond nothing can break. The orphans do what they are told and get away with what they can. The series will focus on some of the characters’ backstories, such as Patrick (the oldest), Professor Hainsworth, and Detective Gowerstone. ________________________________

With the first of seven Britfield movies in development, the theatrical play (Fall 2022), and the Global Book Tour (2022-24), it is estimated that Britfield will eventually surpass the Harry Potter series in sales and worldwide impact. The first live-action Britfield movie is projected to become one of the highest grossing films in cinematic history, rivaling the original Star Wars (1977) and ET (1982). One of the most awarded books in fiction, the Britfield & the Lost Crown series is transforming literature and education while bringing encouragement to children and families worldwide. The 7-book series (England, France, Italy, Russia, Asia, South American, United States) will be followed by 7 extraordinary movies. Britfield & the Return of the Prince launches June 2022.